China is usually perceived as difficult by Europeans: communication is impossible, constant daily hassle, unyielding culture and far too many people. We are here to experience the truth of it. If there is any prejudice in particular you would like us to check out – let us know. 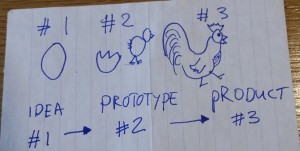 Communication on the Huaqiangbei Bazaar has not been too bad! There was one interaction where we were trying to purchase some buttons where all communication broke down (see the picture of our attempt to explain the concept of prototyping) but for the most part we have been doing fine.

Most of the people we meet speak some electronics related English, few of them speak enough English to have a small conversation while 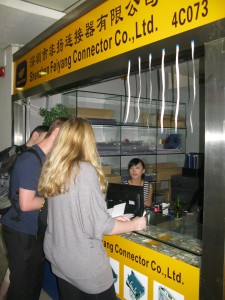 an equally small amount speak no English at all and simply ignore you. We have met no fluent English speakers on the Bazaar. However, on the Bazaar the language barrier is hardly a problem as the interaction you have is structured  – thank heavens – with numbers we can all understand. It’s basically a conversation via calculator. What you want is simple and expected. Point at a thing and then indicate how many of that you (might) want with pen/paper, a mobile device or on the calculator that everybody has behind their counter.

One such exchange with a very helpful Chinese woman who spoke no English at all, ended in a pack of jelly beans (FETs, power regulators, opamps, logic ICs etc > about 12 different kinds, 25-50 pieces of each) and the spontaneous exchanging of gifts. I got her pocket magnifier with LED and gave her a small Delfts blue kissing statue.

The communication in numbers mostly refers to one of two things: quantity or price. You can haggle over the price if you want but the margin for haggling is not of Arabian width and everything is really cheap already. We tried to get a lower price a few times just to test the concept – just typing in another number as a counter offer works fine. The biggest problem we had was that sometimes the quantities we asked for were too low – 50 pcs instead of 5000 pcs – and people simply would not sell to us. No worries, thank them and move on. There are many stalls that carry the same things and another one might have a small amount available. To us this was another reason not to haggle as selling smaller amounts seemed to be more of a hassle.