The FPGA-based Goldfish is still in constant flux. I decided it needed more encoders on the frontpanel, AND some visual feedback for the value of each of the encoders. Each encoder now has 16 LEDs around it to show the current value/meaning.

Apparently there are some suppliers that build complete rings (like Top-Up ), but I want to build my own rings first.

To build these rings, I wrote a small .NET tool to generate the scripts for Eagle. (If somebody has use for this or something like it, let us know on Twitter – I think it is too small/dirty to warrant its own github project – and it has been done before by others too) 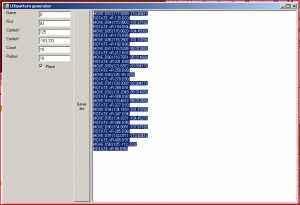 The final puzzle to solve before the board can be routed and fabricated is the various ways I want the chips to talk to each other.

The interface board can be used as a standalone Arduino Mega (with TFT, touch and encoders) – using serial + reset to use the Arduino bootloader

Now.. the UI board needs to talk to either the fpga or the mk20 based on the final firmware.. and the K20 might need to send commands to the video interface on the FPGA.. or on the UI board.. and the FPGA could send stuff to the audio codec… but the current goldfish code runs fine on the K20… so an optional bridge between the audio codec and the K20 might be handy to have as well… CHOICES!! if I can cleanly upgrade the K20 to a K22, the extra FPU performance will definately warrant codec-connection to that chip…

I’ll be back in the basement trying to decide what will happen. Building an open experimentation platform is all about enabling possibilities. But at some point I shall have to make concessions even before the first experiment.

About the Author: Stijn Kuipers